The new TRU-SPEC BDU Xtreme was developed in a partnership with A-TACS Camo and was created with the input of Special Operations and Law Enforcement personnel. It is a hybrid uniform design and bridges the gap between the original BDU and the modern ACU by incorporating many of the best features of both. Cut from soft yet durable 50/50 vat dyed nylon cotton rip-stop material that resists fading and shrinking, these uniforms are built to perform These are very comfortable and surprisingly soft for rip stop pants. I've been a fan of A-Tacs since the original FG's were new many years ago and am still wearing the same Proper A-Tacs FG's which are still holding up albeit faded. Hence why I only now purchased the IX and FGX's! In my experience the years I've found that Proper bdu's buttons fall off and Tru-Spec seams unravel but I've had multiple pairs of each which occasionally require said maintenance. That being said, I've always found it easier to replace buttons so I was disappointed these patterns are only offered by Tru-Spec but re-stitching isn't really all that bad either. With the soft rip stop fabric, I'm concerned the fabric itself will become worn out more quickly than just the seams or buttons but time will tell and I likely will have long forgotten to post an update given some of my other BDU's are still holding up nearly a decade after purchase.

As far as my initial thoughts on both pants, they are again, very soft and comfortable for rip stop, and some fibers from the fabric seem to hang out from both pairs belt loops which catch on the velcro of my riggers belt but I expect those to be gone after a few more wears. Buttons on the cargo pockets are a welcome feature over the velcro of past Tru-Spec's but the feature of these pants that really shine over anything else is the pattern. Going into summer in Appalachia both the FGX and IX offer excellent concealment; I expect the FGX to be less effective in the fall and winter months but they're both really, really cool looking even when not trying to be discreet! I'm not a leisurely hunter so I cannot speak on how well effective they are in that regard but as a survivalist testing against other human eyes, these patterns seem to be highly effective; even more so than multicam and previous A-Tacs patterns.

If you can afford to spend a little more, get these! 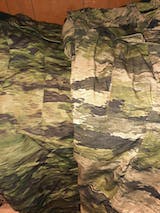